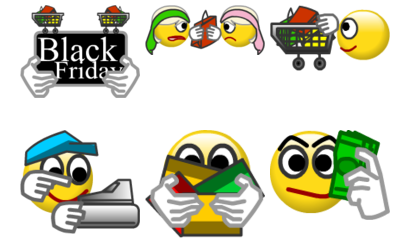 BlackFriday is a power that represents the day "Black Friday" (the day after Thanksgiving) when retailers may offer promotional sales. The power is typically, though not always, used as a gimmick for xat's Black Friday deal.

Information regarding xat's Black Friday deals are listed below.

A series of five ID auctions were held in November 2020, which included the release of the ID 2021. xat also held power auctions for the powers Aprincess, Big and Boot. Five rare powers were also released in store: Summerhug, Kdemon, Angry, Instruments and Spacewar.

On 26 November 2020, the test power 613 was given out to a random selection of xat subscribers for free. This test power became Trader, which was released to celebrate the trading community of xat.

The xatTrade Team held a huge giveaway on 23 and 24 November 2018, which was sponsored by xat admins. Over 150,000 xats were given out in prizes across four chats.

In 2016, to celebrate Black Friday, an offer was added to the "Buy xats and days" page, which would allow you to claim a free power depending on which package you bought.

A few limited powers were released for a cheaper price in random intervals, which were announced via xat's Twitter. Promotion was also available for 75% off.

Users had to claim their free power on a special page after they bought a xats and days package.

In 2015, to celebrate Black Friday, there was a 50% discount on a power for a selected number of users on xat.

Approximately 32,000 users were selected at random to get powers at half price.